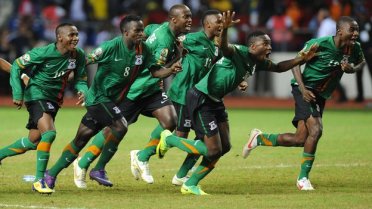 Abstract: Short poem about the Zambia national football team (aka Chipolopolo or Copper Bullets). In the build up to the Africa Cup of Nations 2015, I reflect on Zambia’s astonishing and historic victory at the 2012 edition of the tournament. Could it happen again?

Awaiting the result that would leave them all astounded.

A young man steps up to lay stake among the greats,

Sunzu his name, one kick and then we celebrate.

“The elephants”, they called them, as a sign of their power,

Yet they seemed to falter at their supposed ‘divine hour.’

Not a chance was given against such opposition,

Yet if they lose now they’ll be a mass inquisition.

The weight of this moment precedes grown men’s cries,

As we remember our dearly loved brothers who died.

Years before they chased the same final destination,

Only to have their lives cut short like abbreviations.

KK11 we remember you still today,

May your spirit of ambition spur us on as we play.

So many greats have risen since your sad and sudden fate,

Kalusha, Tana, Lota, among many candidates.

But none awarded the privilege to lift the great cup,

Woohoo! We did it! Come and have a look,

Though all the doubters still claim it was only but a fluke.

Yes, ok. We’ve had a blip from then until now,

The fans they yell “Chipolopolo! Iyeeeee,”

Love us or loath us, we have come here to stay,

Whether at home, in town or even a cafe,

Go Go Zambia! We’ll cheer you all the way.